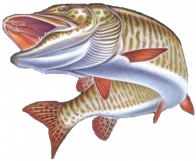 "Ron took me on my first MUSKIE TRIP several years ago, and promptly put me on to my first MUSKIE. It was a small one. A short time later, I felt another tug on my line, and reeled in a sizable bass. A few pictures and it to was back into the water. Once again we were on our way, and I was razzing Ron about the two fish I had caught, and that he hadn't caught any (nah nah nah nah nah) He quickly retorted with a wide grin on his face, " Just you wait". Well, sure enough, after a while of persistent fishing, WHAM, his fishing pole doubled over as if he had snagged a passing boat. I could tell by the look on his face, that there was a serious fish on his line. By the way the boat was being pulled around, I began to wonder who caught who. It was a monster MUSKIE, the biggest fish that I had ever seen. After successfully landing a 48 inch, 32 plus pound fish, photos were taken and congratulations were given. 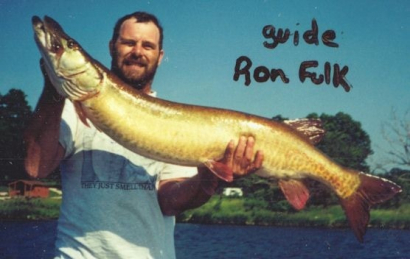 "We once boated four MUSKIE in a three hour time slot. (With one follow up.) It was on a beautiful June morning, at about 9 AM. We had been fishing for a short time, when Ron spotted a large mark on his depth finder. "Get ready" he said. Sure enough, my pole was almost ripped out of my hands by a fish that hit with more force than I had ever felt before. I looked at Ron and said "This is a big one, a really big one". We finally wrestled him to the boat and Ron was able to slip the net around him. It was gigantic 49 inch, 35 pound MUSKIE, the biggest fish I had ever caught in my life, and it was all due to Ron's expert guidance." 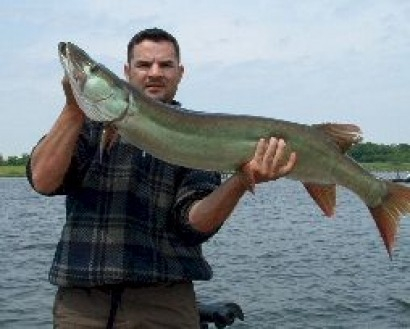 Since my first trip with Ron over a year ago, I can honestly say I have become a better Muskie fisherman.  Ron has a huge amount of experience and knowledge, and what sets him apart from other guides is that he is adamant about sharing this experience.  Ron is a great teacher, and he takes the time to show you ways to become a better Muskie fisherman.  From knots and casts, to retrieves, netting, and planning a trip, Ron is always willing to show you how it's done.  As a guide, he intimately knows the fish he guides for, and closely knows the lakes on which he hunts.  Fishing with Ron is always a pleasure, and last June, he guided me to my personal best, a wild 45" from Shabbona.  Ron Fulk is a true value for the money because of the amount of knowledge you leave with after your day is done. 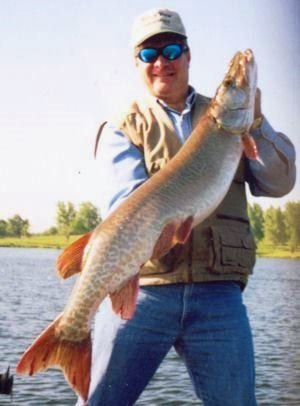 "Ron Fulk exemplifies the definition of a Muskie fisherman and a guide. Ron has a true passion for the sport of Muskie fishing and for the conservation of our natural resource. Not only will Ron put you on to the fish of your lifetime but he will teach you how to catch them on your own. This proves to make the day not only exciting but very educational. I never thought that it was possible to catch Muskies of high quality in the Chicago area, but Ron made it happen. He has given not only myself the thrills of my lifetime, but plenty others. Plain and simple, Ron is the best guide that I have seen." 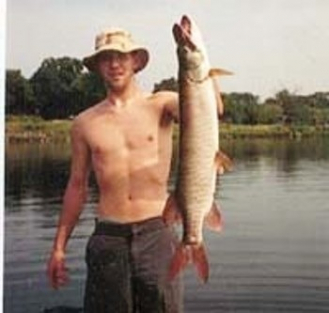 Ron made my first muskie trip one to remember. I caught my first two muskies ever in the same morning. He'll teach you the basic fundamentals, different techniques, and baits you need to learn to start landing muskies on your own. Ron will give you the confidence you need to make your next muskie trip a productive one." 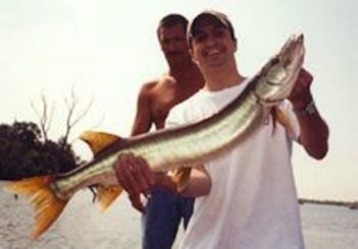 Thanks for the great time on Saturday morning. I learned a lot from you about the lake and even more techniques that I know will help me catch more muskies anywhere. Knowing how hard muskie are to find and catch, I was so happy to hook and land one, I spent many hours and days without even catching sight of one. 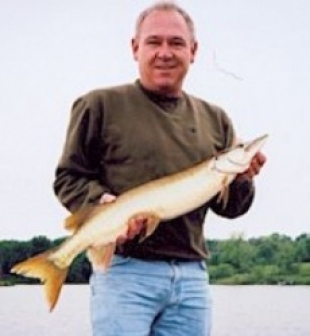 It is true, that is me in the photo of the "Fish of the Day".

Have a great day, 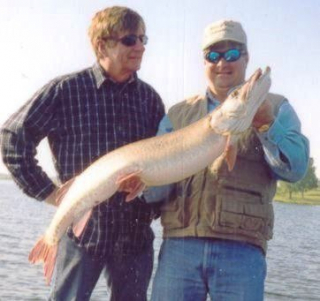 Went out this morning with Ron Fulk as guide. This was my first attempt at fishing Muskies. Water temp was approx 62 degrees, overcast and cool morning. Hooked, boated and released a Muskie while trolling at 7:15 am, the fish was about 25". He was caught using a Tennessee Shad. Later on about 9:30 am hooked, boated, and released a 36" fish. Ron offers a very reasonably priced guide service. His equipment is first rate (I think he had at least 200 different lures on his boat). More importantly, Ron knows Lake Shabbona and Muskies very well, and he is really good about teaching new fisherman what they need to know in terms of equipment, tactics, and lake topography.
OK, I know....Muskies are the fish of 1000 casts, and maybe I just lucked out, but even if I hadn't caught a fish, I know that Shabbona is a very good fishery for Muskie. I didn't expect a lot when I arrived this morning, and I went home amazed.